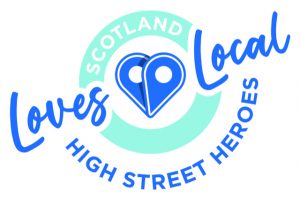 You are receiving this message as either someone who has made a nomination, been nominated – or both- for the High Street Heroes Awards. This initiative is run by the Scotland Loves Local Campaign, which is managed by Scotland’s Towns Partnership.

The awards recognise the people, businesses and local organisations who have gone above and beyond to support their communities during the coronavirus lockdown and re-opening. High Street Heroes also celebrates those who have helped local shops and high streets to be innovative, resilient, and to operate in a safe and welcoming manner.

We are excited today to announce the results of the awards. A two-page feature including list of all nominees has been published in today’s Herald newspaper. In addition, here at Scotland Loves Local we have issued a news release and a national Roll of Honour listing the High Street Heroes in each local authority area of Scotland.

In each area one Regional Champion and a few select Highly Commended titles have been awarded. These entries have received prior notification and will receive a certificate of recognition. Meanwhile all eligible entries are being celebrated and thanked with the title of High Street Hero in our Roll of Honour.

The Scotland Loves Local review team were humbled by the extent of public support shown for local High Street Heroes, with over 1,200 nominations received for around 600 individuals, businesses and local groups who have made a positive – and often crucial – difference to our communities during a challenging year. The judges who reviewed each nomination found it extremely difficult to select regional awards due to the nature and extent of the incredible acts of solidarity and community spirit which were evidenced by the entries sent in.

All nominees have received the heartfelt thanks of both Scotland’s Towns Partnership and the Scottish Government’s Communities Secretary.

Scotland’s Communities Secretary Aileen Campbell praised each and every award nominee for their efforts, saying: “I would like to thank these High Street Heroes for going the extra mile to help their communities during the coronavirus pandemic.

“I am pleased the Scottish Government has been able to support these awards through our funding for Scotland’s Towns Partnership. They typify the kind of community spirit that has supported people and improved lives.

“This has been a difficult year for all of us, and the only way we will get through is by sticking together, being kind, and offering help where it is needed. The fact that these awards received more than 1,200 nominations just shows how much people have appreciated those who have pulled together to help one another.”

STP’s Chief Officer, Phil Prentice, said: “The dedication with which people across Scotland have supported those around them during the pandemic has been remarkable. We’re delighted to shine a spotlight on the amazing difference that our High Street Heroes have made and thank them for all they have done.

“They are an inspiration – local people helping their communities and customers like never before. They highlight the vital part that high street businesses play in our lives and why we must support them to ensure they continue to be there for us.”

Our thanks once again to you all for taking part, and please do get in touch if you have any further queries regarding the High Street Heroes awards.