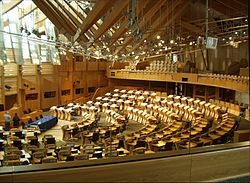 Asking the Minister for the Environment and Climate Change, Paul Wheelhouse MSP, what assessment it has made of the discharge by local authorities of their obligations under the Flood Risk Management (Scotland) Act 2009.

The Minister replied that “in conjunction with the Scottish Environment Protection Agency, the Scottish Government is providing support to local authorities and other responsible stakeholders to develop those plans, which will help to protect communities across Scotland”

Ms Ewing highlighted the experience of recent flooding in Comrie and stressed that, “the overarching priority for the village is to get to the bottom of the problem and then to ensure that it is resolved” and asked the minister to take up this issue directly with the chief executive of Perth and Kinross Council to ensure that all steps that need to be taken are taken as a matter of urgency.

“I understand the member’s concerns and I will be speaking to Bernadette Malone, the chief executive of Perth and Kinross Council, this afternoon to discuss the best way forward for managing and responding to flood risk in the Comrie area.”

“As a resident of Comrie, I know how keenly issues around flooding are felt and how many questions have been raised by the most recent incident.

“I am pleased that the Minister has listened to the concerns that I have raised with him and that he recognises the urgency that local people want to see associated with this issue.”

This website uses cookies to improve your experience. We'll assume you're ok with this, but you can opt-out if you wish.Accept Reject Read More
Privacy & Cookies Policy
Necessary Always Enabled
PKC Flood advice for the next few days – Good News so far !News
Roseanna Cunningham Welcomes Improved Flood Warning SystemNews