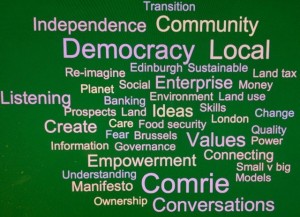 I am delighted to announce that the final Comrie Conversation of the year on the 19th November (19.30, White Church) will feature three real heavyweight speakers in the debate around Scotland’s future.
Iain Macwhirter is a journalist and one of Scotland’s most distinguished political commentators. His recent book (and TV series), ‘The Road to Referendum’ charts the history and development of the independence question in Scotland.  Iain quite rightly is in great demand as a speaker. He loves the idea of Comrie Conversation and has said he is keen to take part as it ‘…..sounds like fun!”.
Playwright and theatre director David Grieg is already internationally acclaimed in his field, with a growing reputation as a commentator on the independence question and the future of the nation. David is a good friend of Karine Polwart who spoke at the last Comrie Conversation. Karine sang the praises of our discussions and it’s great that we are now being recommended by our speakers!
Simon Pepper was head of the World Wildlife Fund in Scotland for 20 years and Rector of St Andrews University for 3 years from 2005. Simon is a passionate advocate for a sustainable Scotland and has written extensively on how this might be achieved. Simon lives in Aberfeldy and has been to all three Comrie Conversations as a participant.
I do hope you will be able to attend and encourage your friends to come along. It will be great to make sure we have a full house to do justice to these great speakers.
Comrie in Perthshire