This message is to draw attention to the unexplained loss of a Curling Club trophy and to seek help from anyone in the area who may have information regarding its whereabouts:

The trophy in question is an antique curling brush (or broom) which is approximately 4 ft in length and has a black ash wood handle inlaid with silver spiralling. At one end there is an ornate silver knob and at the other is a brush made of old style bristles. The brush was donated to the Monzevaird & Strowan Curling Club (later amalgamated with Comrie) in the 1940s by a Mrs Boothby, in memory of her late father, Maj. H Graham Stirling. The brush is inscribed with the names of the trophy winners. In the above photograph it is the brush lying across the table from left to right.

Its disappearance is a mystery. The last confirmed sighting was at the Club’s annual dinner at the Golf Club in March 2016.

If you think you know anything about the trophy’s whereabouts please contact the Club President, Steve Chapman on 01764 679885, or any member of the Curling Club. 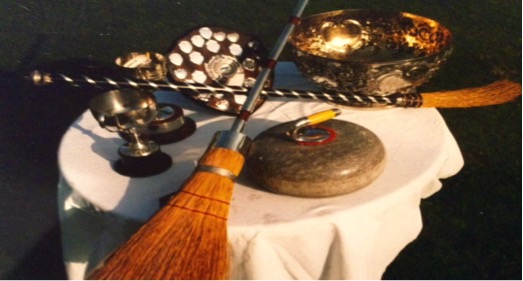