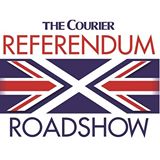 With the independence referendum now a little under five months away, The Courier is taking to the streets to find out what you think.

Their Battle Bus will be rolling into towns and cities across Tayside, Fife, Central Scotland and the Mearns as part their campaign to make sure voters are as informed as possible ahead of the ballot on September 18. It will be in Comrie on Tuesday 6 May between 10 and 12am.

They have invited representatives from both campaigns to put forward their case for either a Yes or a No vote, so this is your opportunity to quiz them on their rhetoric.

The aim of this roadshow is to find out what readers feel about September 18 and beyond.

They will take the debate direct to the people, giving you the opportunity to air your own views about the referendum and comment on what you’ve heard from campaign representatives.

During the journey they will also be carrying out an unprecedented survey of voters’ concerns and voting intentions.

Please take advantage of this opportunity. 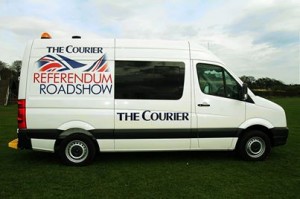