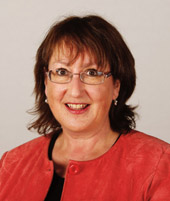 The Scottish National Party’s Ms Annabelle Ewing MSP, Member of the Scottish Parliament representing Mid Scotland & Fife asked a question in the Scottish Parliament this afternoon (Tuesday) highlighting concerns about potential difficulties residents in flood-hit areas such as Comrie might face in re-insuring their properties because of insurance companies not taking account of remedial action being undertaken by the local authority.

“I wanted to raise with the Minister the important issue of insurance problems that can face householders after a flooding event such the one experienced in Comrie recently with insurance companies saying, at the time, of renewal that they do not have clear information about whatever remedial action the relevant local authority is taking and so declining to provide over for future flood damage.

“I asked the Minister to raise the issue with Perth & Kinross Council and other local authorities to ensure that all flood-related works are clearly and proactively communicated to the insurance sector so as to reduce the risk of this happening.

“I was pleased to learn from the Minister that steps have already been taken in terms of sharing data; that he encouraged local authorities to inform the insurance industry of whatever progress they were making and that he will raise the issue directly with the Association of British Insurers when he next meets with them in a few weeks’ time.

The full text of the exchange between Ms Ewing and the Minister was as follows:

Annabelle Ewing (Mid Scotland and Fife) (SNP): I want to pick up on the important issue of insurance that arises post-flooding following events such as the one in Comrie in my constituency. The insurance company, at the time of renewal, will say that it does not have clear information about what remedial action the specific local authority is taking. Will the minister undertake to discuss the matter with Perth and Kinross Council and, indeed, other affected council areas, to seek that they proactively communicate with the insurance sector what they are doing to reduce the risk that flood cover will be withdrawn?

Paul Wheelhouse: The Scottish Environment Protection Agency has recently written to all local authorities seeking their permission to share the data that it provides to the Scottish flood defence asset database with wider professionals involved in flood risk management and allied services such as the insurance industry. It would do no harm whatsoever for councils to be open about their future plans with the ABI and, where necessary, individual insurers, to inform them of the progress that Annabelle Ewing has quite rightly identified and to improve the availability and cost of insurance to the community. Without that information, it is entirely reasonable that insurance companies would assess the area as having a continued level of high risk. Once the proposals are known and are being implemented, it is important that local authorities and all those involved share that information so that people do not face unreasonable premium levels when insuring their properties. As I say, I have a meeting planned with the ABI, which will happen in a matter of weeks, and I guarantee to Annabelle Ewing that I will raise the issue with it.