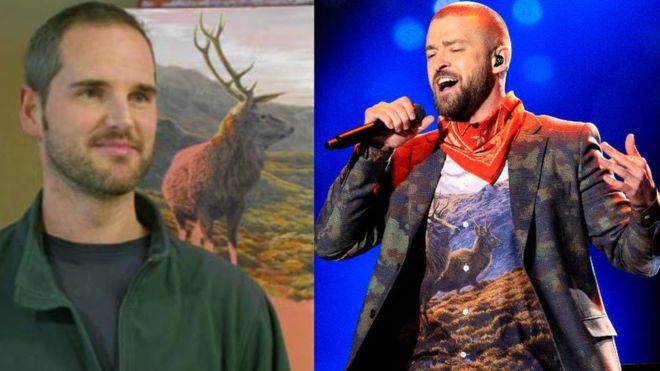 A Scottish-based artist got the surprise of his career after Sunday’s Super Bowl thanks to JustinTimberlake.

Martin Ridley returned from a day on a Perthshire mountain to the news his work had been seen by 100 million American football fans worldwide.

His painting, Ben Halton Stags, was emblazoned across the chest of half-time performer Timberlake.

He had no idea the artwork he sent to designer Stella McCartney was for the singer’s stage outfit.

Martin, 50, had been approached by the famous fashion designer to collaborate on some designs.

She was looking for wildlife-style artwork for a new project.

Martin told BBC Radio Scotland’s Good Morning Scotland programme: “They approached me a while back and we spent a bit of time looking through my images.

“I sent in different designs which they would try working up and then they’d come back and change their minds.

“There was a bit of to-ing and fro-ing but I didn’t really know the bigger picture of what was unfolding.

“I suspected it might have been something quite big as I had a confidentiality agreement.

“But I was essentially in the dark. I thought they were launching a new line or something and they were trying to keep it away from the press.”

Martin, who lives in Comrie, was shown some of the designs to see how they were developing but he did not see the eventual combination or the whole piece.

The first he knew was when he turned on his computer on Monday.

Justin Timberlake’s starring role in the half-time show as the Philadelphia Eagles beat the New England Patriots 41-33 in Minneapolis on Sunday evening had sent him viral.

He said: “I didn’t know Justin Timberlake was involved – I was totally in the dark about that.

“It was a bit surreal. When the news broke I had just been out on a misty, snowy mountain top in the bleakest weather for about six hours.

“I came back to the house and flicked on the pc and my inbox just filled with messages from reporters from around the world.

Stella McCartney revealed her involvement via Twitter, and fashion publications have been writing about the creation.

It’s believed the outfit was inspired by the title of Timberlake’s new album The Man of the Woods.

The designer said of Justin: “He’s always carried himself with style, so to dress him is a real honour.”

Martin may now be a household name in the fashion world, but he is not going to become an American football fan any time soon.

He said: “No, I wasn’t watching the Super Bowl so I had no idea.

“I live in a little rural cottage in a small village in the Highlands, so my passion is the outdoors and the wildlife.”