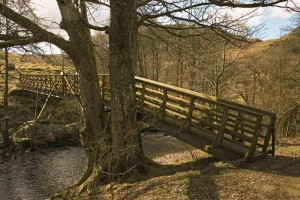 ROSEANNA WELCOMES PROGRESS ON BRINGING SHAKY BRIDGE BACK INTO USE

The Scottish National Party’s Ms Roseanna Cunningham, candidate for the Perthshire South & Kinross-shire constituency, has welcomed clarification received from the Chief Executive of Perth & Kinross Council regarding the condition of the Shaky Bridge in Glen Lednock.

“I understand that many people regard the Council officials as having acted in an overly-careful manner in closing the Shaky Bridge and there is no doubt the closure is a considerable inconvenience, not least in that it is an important link in the local paths network.

“People should be aware, however, that the problem is not so much with the bridge itself – which does indeed to be structurally sound – but the tree to which it is attached on the north bank.

“It is entirely right and understandable that the Council should take a cautious approach with regard to public safety and I am pleased that steps have already been taken towards identifying what remedial work might be required to enable the bridge to be brought back in to use as quickly as possible.”

Tuesday 5th April
I received a message this morning from the office of MSP Roseanna Cunningham, a response from PKC to her questions about the Shakey Bridge

Please click on the link to view the letter: Full response from PKC re Shaky Bridge