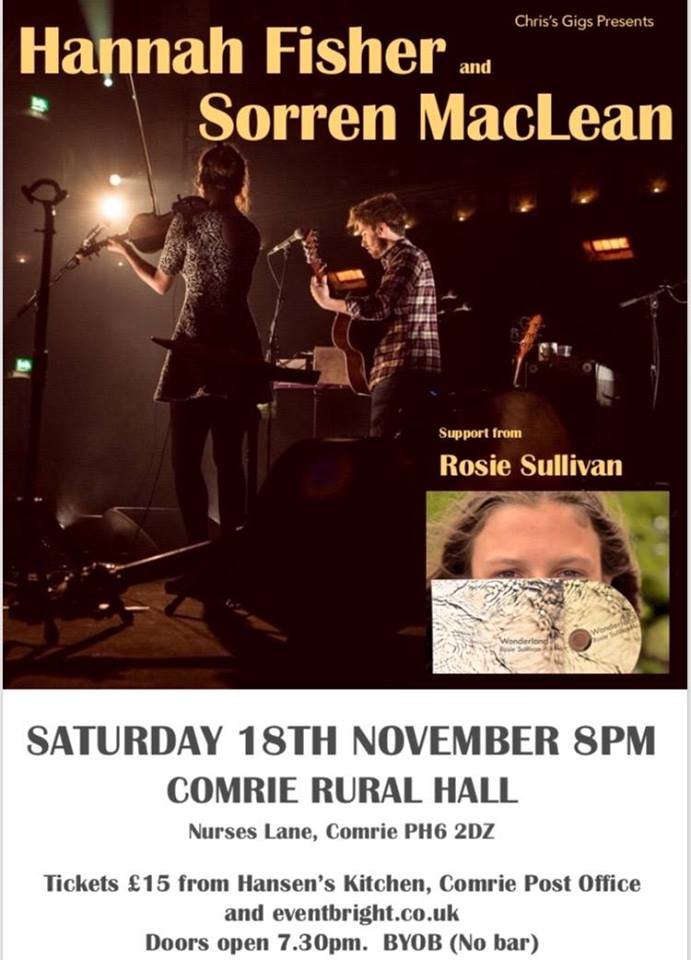 Indie-folk duo Hannah Fisher and Sorren Maclean play a mix of original and contemporary songs and tunes, blending rich vocal harmonies with bluegrass influenced fiddle tunes. When not writing, recording and performing together, both Hannah and Sorren tour extensively with Idlewild, Roddy Woomble, King Creosote and Karen Matheson. Both have released solo records with Sorren’s debut album ‘Wnter Stay Autumn” being included n the Herald’s Top Scottish Albums of 2015. Recent noteable appearances include joining KT Tunstall at the opening of the Queensferry Crossing, sharing stages with the likes of Ricki-Lee Jones and Turin Brakes as well as performing at Glastonbury. The Herald describes Sorren’s songs as ‘Perfectly formed’ adding ‘Hannah Fisher’s fiddle again proves one of the secret weapons of Scottish indie-folk.’

Rosie Sullivan is a 15 year old Lewis singer/songwriter who has been writing songs since she was three years old. The talented 15-year-old from the Western Isles has had a busy career already since winning a leading singing and songwriting competition in 2015. Since then, and her subsequent performance at Wembley Stadium, Rosie has released her debut E.P. Wonderland, performed regularly including slots at Belladrum and Thornhill festivals and won fans and admirers from all over the world.