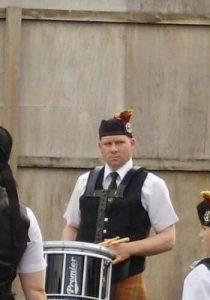 Ian has been involved with pipe bands on and off for 33 years. Born at cultybraggan farm just outside Comrie before moving to Muthill, Ian first took up drumming at the age of 8 when he joined the gleneagles strathearn pipe band based in Crieff. With tuition from James McWilliam it wasn’t long before he was out performing with the band under the leadership of PM Andy Renwick and DS John McWilliam.
After starting secondary school Ian decided to have a break from pipe band to concentrate on his schoolwork. At the age of 16 he was asked back to gleneagles strathearn to take over as leading drummer. It was then he met the greatest influence of his drumming career, John Moneagle and under his guidance along with PM Davie Hutton went on to lead the band on the competition circuit.
At the age of 21 Ian fancied a new challenge and decided to join Perth and District pipe band , where under the leadership of PM Scott Murray and DS Stuart Ritchie then Brendan Hadden had a successful spell with the band finishing in the prize list on numerous occasions including runner up spot at the world championship.
It was during his spell at Perth he moved back to Comrie to set up home. He first got involved with Comrie Pipe Band when he was asked to help out and play at the famous flambeux parade at new year and later on that year with work and family commitments meaning he couldn’t commit 100% to Perth he decided to take up the invitation to become DS at Comrie. During his time at Comrie he’s taken great satisfaction in the amount of drummers of all ages he’s taken from scratch to being fully playing members of the band.
Although having considered retirement on a few occasions he might just have a few years left in him yet.