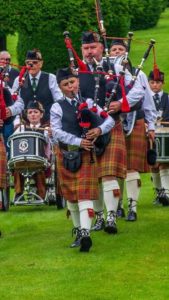 Harry started chanter lessons at the age of 9 under the instruction of PS Johnathan McDonald at Comrie Pipe Band. Johnathan motivated Harry, and encouraged his passion and determination. He often joked that Harry would be the first Scottish Manchester United striker to pipe on the pitch at Old Trafford. Sadly, Johnathan moved away and Harry was without a tutor for a short time.

Thankfully, in late 2017, Harry started tuition again with Alan Harrison at Comrie Pipe Band. Alan refocused Harry and taught him the vital skills to move onto the pipes. Unfortunately, Alan also moved away, but thankfully, by then, Harry was practising with the band on Thursday evenings. So, with further excellent tuition from Robert Patterson and the support of his PM, Harry eventually made his first appearance with the band at the opening ceremony of the 2019 Comrie Fortnight.

Harry is a dedicated piper who endeavours to make every practice and performance. He is proud to march with Comrie Pipe Band and describes the band as his second family. Harry will hopefully serve under the leadership of the inspirational PM Willie Nicol for many more years to come.