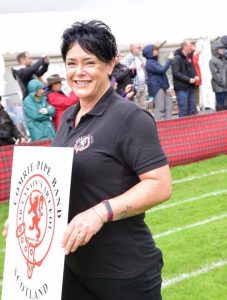 My love of Pipe Bands began at an early age after watching the Gordon Highlanders Regimental Pipe Band with my dad.

At age 9 I decided I wanted to learn how to play the bagpipes and began my tuition with Davie Duncan, a retired PM with the Gordon Highlanders Regimental Pipe Band. Following 3 years of chanter lessons, I was given my first set of bagpipes. However, I did struggle to keep the pipes going but with a little help from my dad, grit and determination I was soon on my way. My first Pipe Band was the Fraser Ladies in Aberdeen. Unfortunately after a couple of years the Pipe Band disbanded and I went on to play with Portlethan Pipe Band for a short while before hanging up my pipes.