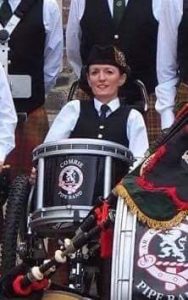 Amanda’s love of Pipe Bands started by watching Comrie Pipe Band practicing at the school not far from her house when she was little. At 8 years old she joined as a tenor drummer being taught by Rosemary Campbell, but decided it wasn’t for her.

Fast forward a few years and after some major spinal surgery at 13 yrs old she was told to find a calm hobby, so took up the snare drum this time with Gleneagles Strathearn Pipe Band, being taught by John Moneagle who seen her potential despite her wheelchair.

Getting a snare drum attached to the wheelchair was a challenge, and her dad has had many more challenges pushing it over various terrains, but they’ve always made it. Over the years with Gleneagles she had many highs, playing at Bremar Highland Games for the Queen and Queen Mother, earning a Blue Peter Badge by playing on their show, regular engagements at Gleneagles Hotel and playing at competitions including the Worlds at Glasgow.

After finishing school, work made it hard to keep up the commitment needed for a competing band, so joined Comrie Pipe Band. She loves being part of the big family ethos, and enjoys assisting Ian in teaching those learning. The France trip is definitely her biggest highlight of her time at Comrie and she hopes to be with the band for many years to come.

This website uses cookies to improve your experience. We'll assume you're ok with this, but you can opt-out if you wish.Accept Reject Read More
Privacy & Cookies Policy
Necessary Always Enabled
Meet the Band – Tenor Drummer Laura ToddNews
Meet the Band – Piper Ewan HamiltonNews