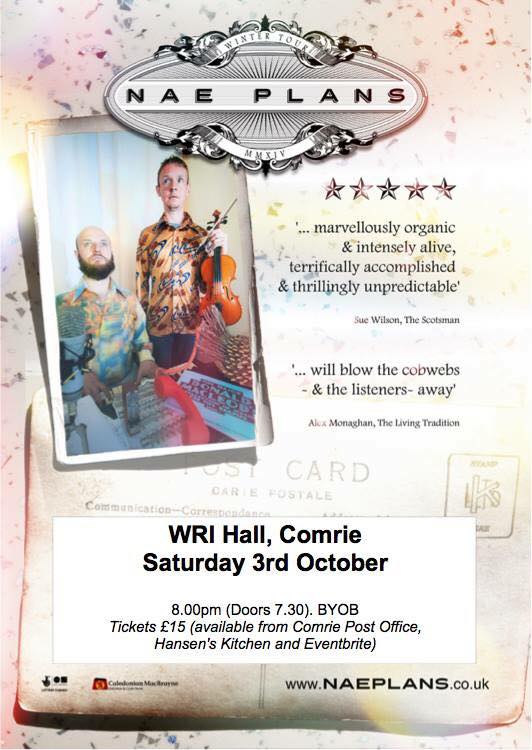 what you need to know is that these are two of the best musical talents in the country, and what they do is arrive with ‘nae plans’. They call on their immense musical knowledge and they perform sets without discussing or prearranging – but they don’t just perform, they arrange as they go, and the result is often extraordinary, sometimes hilarious and always riveting. This isnt something you’re going to see often, and it’s really going to be a special event.

Following the release of an album that was strictly unrehearsed (the pair barred any discussion about what material they would play or how they would arrange it until the ‘record’ button was pressed), the duo have been taking ‘Nae Plans’ on the road… They perform unplanned or ‘off-the-cuff’ gigs, showcasing the talent of two of Scotland’s leading traditional musicians. This daredevil approach to performance brings a crucial part of Scotland’s music culture, the informal session, to the foreground and casts it in a fresh light, bringing its open-ended, spontaneous nature onto the concert platform. The material ranges from traditional songs and tunes, to contemporary numbers, to their own compositions and improv. The live performances capture the duos raw creativity and demonstrates their outstanding musical intuition.