Many Congratulations to all those who organised and took part in the re-enactment of SS Soldiers being marched from the Laggan Park (representing the old Comrie Railway Station) to Cultybraggan Camp was a huge success today.

The sun shone and the Camp was buzzing with soldiers, German prisoners, Army Trucks, Jeeps, Motorcycles and even Cycles.  Every one was dressed for the part, a couple of the huts were set up as they would have been at the time the POW’s were there.  Some of the prisoners were reading German newspapers and other playing dominos as they passed their day.  I can’t help thinking that they were quite happy to spend their POW days at Cultybraggan.  The scenery is stunning and by all accounts they had it easy compared to other camps.  The fact that there are no stories of prisoners trying to escape helps to cement that.

Sandra’s Personal Note:
We were met at the entrance to the camp by an Amy Military Policeman who checked out our car incase we were sneaking in any contraband and we were also searched on the way out incase we were trying to sneak a prisoner out.  One of our locals told of one of her family members faces when a soldier checked them all out when on the Vintage Bus which carried passengers from the village and back all day. (Many Thanks to our village neighbour Mr Souter)  She said his wee face was a picture never to be forgotten.  A couple of our older residents were pleased to see a ‘Clippie’ on the bus giving out proper tickets.  We had relatives visit from West Lothian visiting today and my Husband’s Great Cousin Callum (12yrs old) was over the moon to be visiting.  He loves all things WW2 and was deep in conversation telling the soldiers all about their rifles !  One of the huts was full of army memorabilia.  We dressed Callum in a gas mask and MP tin hat to let him experience it.  He had a wonderful day chatting to the Soldiers and soaking up the atmosphere. His wee Sister Amy tried on an MP’s hat but trying to get her to be a stern policewoman for a photo proved too difficult !  I loved the vintage clothing, the old sewing patterns, gloves, an original wedding dress of the time, stockings, hats, fur stoles, jewellery and they even had a book on hairstyles. Many looked difficult to do !   I thoroughly enjoyed my afternoon and would love it to be an annual event.

In the spirit of Community I would like to thank George and Thea Betty who were filming much of the day to compile a movie to show to our older residents who don’t get out as often or not at all these days – A wonderful thing to do !

One of the German Prisoners posted this message on the Comrie Community Development Trust’s Facebook Page: (https://www.facebook.com/ComrieDevelopmentTrust?fref=ts)

Martyn McCulloch to Cultybraggan Camp – On behalf of all your German “prisoners” this weekend it was without a doubt the best organised and most warmly received show we as a group have attended. The Red cross lunch parcels were a fantastic touch but the feildpost letters from the little kids nearly made a few grown men shed a tear. HUGE thanks and plaudits to Fiona, Lauren and the rest of the organising committee for such a wonderful weekend. Lets hope it gets the backing and we can do it again next year ……(with perhaps a slightly shorter march  )  Thanks again Mart , KGS

We would encourage you all to check out the Comrie Development Trust’s  website who will posting updates and photos. 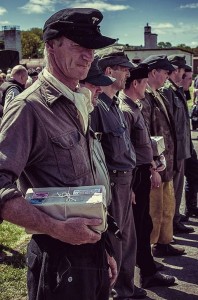 Sandra will be collecting photo’s as the days go on and will compile a Gallery for you all but in the meantime I have included a few to wet your appetite.  If you have any comments to make or photos you would like to send for others to see, please email them to Sandra at sandramcritchie123@btinternet.com

We would encourage you all to check out the Comrie Development Trust’s  website who will posting updates and photos. 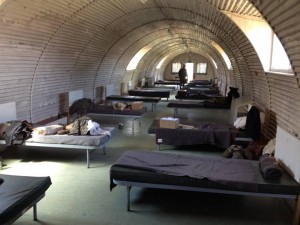 One of the Prisoner’s Huts 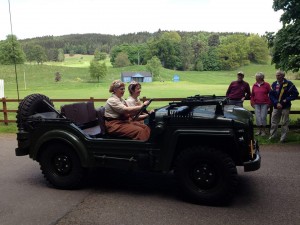 The Land Girls on their way to the Camp