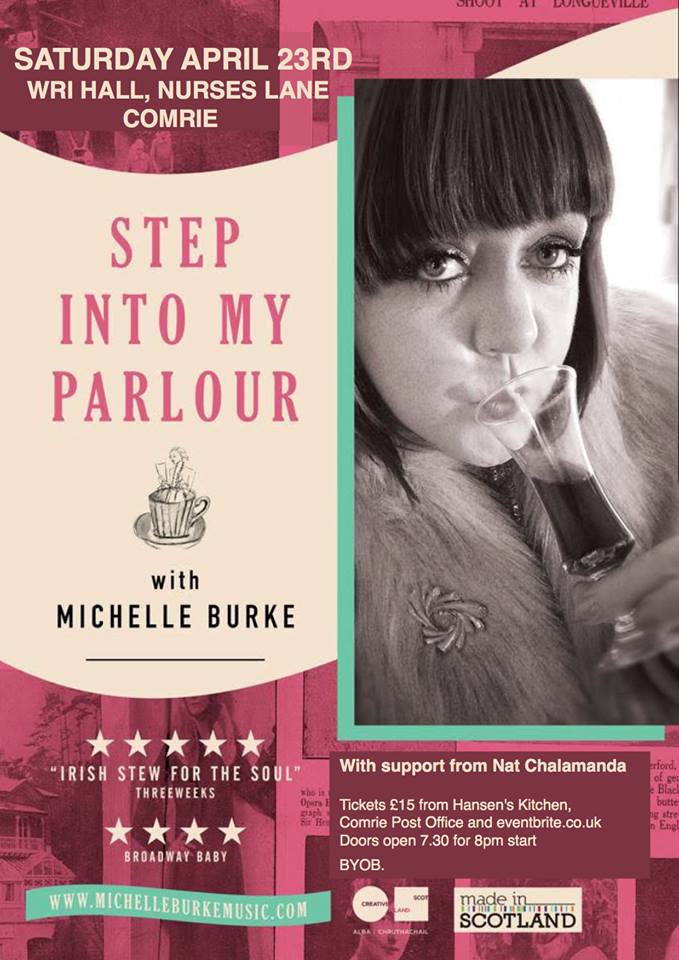 Another cracking gig coming to the village courtesy of Chris’s Gigs….

Michelle Burke brings her award winning show to the village – and if sublime musicianship, wonderful song, stories and brilliant Irish banter appeals, then this is for you.

Tickets from Hansen’s Kitchen, Comrie Post Office and from
https://www.eventbrite.co.uk/e/step-into-my-parlour-michell…

Having establised herself as a formidable frontwoman with the Irish-American outfit, Cherish the Ladies, Michelle Burke has carved herself a reputation as a voice to be reckoned with. The Scottish-based Irish singer’s surreally homely Step Into My Parlour show, in which audience members are as likely to end up knitting or sipping sherry as singing along, started life as a show by herself and longtime musical partner James Ross during the 2012 Edinburgh Fringe, and is a performance inspired by the characters, music and family gatherings of her childhood in East Cork. The show gradually expanded, returning to the Fringe for a sell out run in 2014 and, this year, as part of Celtic Connections. Michelle’s intensely seductive voice, with its natural, proudly genuine Irish accent, is the star of the show – as well it should be. Michelle has managed to persuade a stunning array of guest singers and musicians to participate in recording the album of the same name, including her mentor Cathal McConnell and Carolina Chocolate Drops’ Rhiannon Giddens (who join their voices with Michelle on two tracks apiece), Maura O’Connell and Heidi Talbot. Keenly idiomatic instrumental support comes courtesy of James Ross, Anna Massie, Brendan Power, Martin O’Neill, John Kenny, Kathleen Boyle and Euan Burton. Michelle will be bringing an assortment of these musicians to her show in Comrie.

There will be suppport from the Scottish based Malawian musician Nat Chalamanda and friends. Scotland meets Malawi meets Ireland. What could be better?