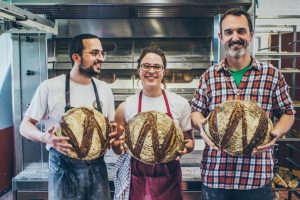 The recently-opened Wild Hearth Bakery has been signed up by Andrew Fairlie to provide bread produced in a restored Nissen hut for his Gleneagles restaurant.

The eco-sustainable artisan bakery was set up at the Cultybraggan PoW camp in Comrie, where Nazi prisoners were held during the Second World War.

Wild Hearth has installed one of the country’s biggest wood-fired ovens – weighing nearly 10 tonnes – in one of the huts which have been converted as part of a community project.

Within months of producing its first signature sourdough loaf, the business has attracted the attention of leading chef Fairlie, and is already planning to expand its operation.

Owner John Castley said: “Things have taken off for us at an amazing pace and the hardest thing has been trying to keep up with the demand for our products.

“To have someone internationally-renowned like Andrew Fairlie add our loaves to his bread basket is a massive seal of approval for what we are doing at Wild Hearth.

“I am pretty certain we must be the only business in the country supplying a two Michelin-starred restaurant from a converted prisoner of war camp!

“It is basically a Nissen hut so it is not much to look at from the outside, and we are already needing more space, but we have installed an extraordinary oven.

“The attention to detail is so great that the wood for our oven is collected by loggers mounted on horseback to avoid damaging the forest floor with heavy machinery.”

Wood comes from 6500-acre Fordie Estate, three miles from Cultybraggan, and is used to fire the custom-built oven housed in the ex-PoW accommodation.

John said: “Like all good wood-fired ovens it has a huge thermal mass which soaks up enormous amounts of heat. That’s the key.

“When the bread goes in, that intense heat is quickly transferred to the loaves to provide what bakers call oven spring. But it’s a gentle heat compared to most electric and gas ovens and the result is beautiful crust colour and sheen – something bakers of a bygone era called ‘bloom’.

“It’s not an oven for the faint-hearted though. It takes ten to 12 hours to fire from cold and handling all that wood is a labour of love.

“However, it is definitely worth it for the beautiful bread we produce and the knowledge that our renewable energy source has been grown three miles away by an estate that planted 90,000 trees last year.”

Wild Hearth mainly supplies the wholesale market, but John has also been a regular visitor to farmers’ markets to sell his bread and sourdough croissants and doughnuts.

John (49) said: “I already wish we had more space and with only one van there’s only so much ground I can cover, but we’ll find a way to meet the demand.

“I’d love to reach a point where I could employ a dozen people from the local community, and if early demand is anything to go by that’s entirely possible.”

After training in Melbourne, Australia, John took up a career in IT, but continued to produce his own bread from an oven in his back garden. In 2010, John retrained as a chef at Ballymalloe Cookery School in Ireland and worked for five years at a number of London restaurants.

He said: “Me and my partner Caroline were drawn to Scotland and we came here in 2015. Opening the Wild Hearth bakery has been the realisation of a dream for me.” 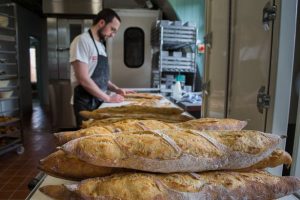