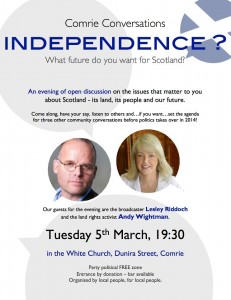 First of all, thanks to everyone who came to the first Comrie Conversation on Tuesday night. It was a fantastic turnout of well over 100 folk. It seems independence is a subject close to our hearts! I’ve been asked for a synopsis so here is one as brief as possible. Please feel free to post your own views of the evening as these things are always subjective.

The evening was opened by Ian Findlay who did a fine job of chairing the meeting. Andy Wightman spoke first and showed a series of slides, Broadly he spoke of the inequalities now facing this country; the levels of private (and public debt); the lack of land reform; and how centralized a democracy we have become. Lesley then talked of the different systems in Nordic countries and compared Scotland to some of those countries. It all made for interesting listening. The floor was then thrown open to discussion.

The second half was spent in discussion round the tables, to come up with themes for the three Comrie Conversations planned for May, September and November. There were a huge range of issues raised from ‘What does independence actually mean’ to “The role of the monarchy”, ‘Re-skilling Scotland’ and ‘How to address the fear of change’. Themes to emerge included ‘How to create a strong economy without trashing the planet’ to ‘What form of governance to we want – Brussels, Edinburgh, Comrie?’ The ‘ideas’ boxes around the room were full of comments and we have produced a mind map of them which will be posted on the Comrie.org website very shortly. I can’t post it here I’m afraid as it’s a PDF file, but I’ll post a link.

There was talk of what we can do in Comrie to make ideas happen. There was a strong feeling that we should keep Comrie Conversations a ‘party politics free zone’ with ideas like preparing a “Comrie manifesto’ and inviting the politicians to come and listen to us in early 2014.

For future meetings folk didn’t want an adversarial style of discussion and favoured a “Question Time’ format but with plenty of chance for creative discussion.

A number of people came forward interested in helping to make the next three happen in May, September and November. If you want to be involved it is not too late – it’s going to be a fascinating year!