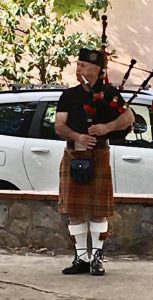 My piping career started @ Crieff High School night classes in 1971 being taught by Davie Donaldson snr. Along with my brother Hamish, we joined Strathearn Pipe Band under the leadership of Archie Osborne. Highlights of these early years were: Highland Nights in Pitlochry and Aberfeldy, where I had my 1st “High Tea” in a hotel in the square; the Highland Games at Lochearnhead and Crieff where the Saturday night culminated in the band marching from the Tower Hotel to play in James Square.

The next 25 years saw piping as a major part of my life and has produced some fantastic memories, like: the trip to the Isle of Man under P.M Jimmy Mortimer; Beating Retreat with the massed bands of the Royal British Legion Scotland @ Edinburgh Castle; playing for the Queen @ Holyrood where she kept us waiting in the sun for a couple of hours and pipers and drummers were passing out due to heatstroke, and the trip to Meadowbank Stadium for the opening of the Commonwealth Games.

My piping career took a turn for the better in the early 80s when Kenny Leask took over as P.M and introduced us to the competition scene. However, Kennys work took him away from us, but we were very fortunate to have Andy Renwick take up the reins and he guided us to many successes including promotion from Grade 4 to Grade 2, with many memorable trips to Cowal Games, British Championship @ Birmingham and to the Interceltique festival in Lorient, France.

By the 90s I found myself out of piping but was fortunate to be invited along with my brother and Uncle Peter to play with Ewan MacGregor’s family band at Tartan Week in New York, twice.

Latterly I spent a couple of years helping out with the Crieff High School Pipe Band and just before Armistice Parade 2018, I joined the band here in Comrie. I am really enjoying my time here with a good bunch of folk and thoroughly enjoyed our trip to France last Summer.

Away from piping, I love to spend time playing with my vintage tractor and taking part in vintage ploughing matches