So over the next few weeks they will be publishing a, ‘meet the band segment on all their members. Starting of with our Pipe Major, William Nicol. 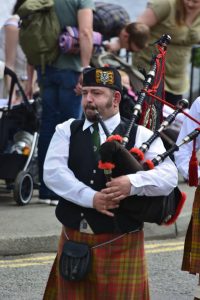 Pipe Major William Nicol is a native of the village of Comrie in the heart of Strathearn.He began learning the pipes at the age of 9 under the instruction of PM David Donaldson at Comrie Pipe Band and also with the late Arthur Cleghorn . Further tuition was given by Angus Clarke during his high school years.
He continued to play with Comrie under PM Peter Lowe untill at the age of 16 before he left the band to peruse other interests. Rejoining some 15 years later and serving under PM Sandy Campbell and PM Rob Bolton who quickly saw the potential in “Wull” and appointed him Pipe Sergeant where he remained untill 2014 when he took charge of the band for the 1st time . Some 6 years later PM Wull is still extremely proud to be at the helm of such a fine band and while Comrie is a non competing band they always endeavour to put on the best display possible .Wull always prides himself in trying to get the best out of the band while ensuring the friendly almost family atmosphere remains throughout.[/vc_column_text][/vc_column][/vc_row]