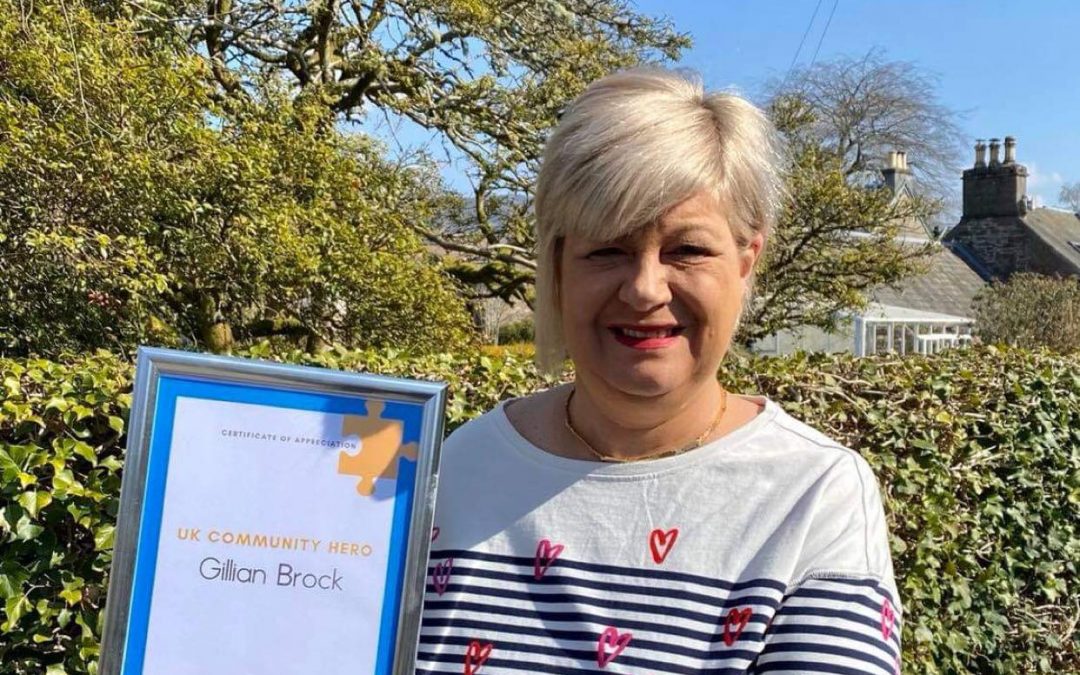 Comrie Community Councillor Gillian Brock has received special recognition for her tireless work during the past year to help vulnerable people in Comrie cope with the strains of the pandemic. The awards, given by the UK Community Network, recognise the outstanding contribution to community life made by volunteers like Gillian. Fellow community councillor Sandra McRitchie and residents George Lees and John King decided to nominate Gillian for the award as a small token of appreciation, not just for her work during the pandemic, but for all that she has done for the people of the village over many years.

“I still can’t quite believe I won this award and feel very humbled that throughout the whole of UK that I was one of the winners,” said Gillian. “The first I knew about it was when I received an email saying I’d been nominated by residents of Comrie.”

The award was presented during a ceremony held via Zoom, with Gill’s mum and Sandra invited as guests. “It was lovely and extremely touching hearing the stories of what people had done, especially during lockdown,” said Sandra, adding, “Having worked with Gill for years now via the Community Council, I am so proud she was chosen to receive it.”

“Gill is an absolute diamond,” said Comrie resident Veronica Doyle. “She fights really hard for the people of Comrie. I’ve known her since she was a child, and she would do anything to help anybody. She’s just a-ma-zing!”

Originally from Crieff, Gillian has always been passionate about fundraising for the less fortunate. And it’s a passion she has sustained since moving to Comrie 26 years ago. “I love where I live,” she says. “I feel very privileged to be able to contribute to making Comrie the special place it is.”

Comrie residents are used to seeing in Gill in real life and online, constantly on the go, whether it’s campaigning for road repairs, assisting the elderly with essential deliveries, setting up the local trishaw service, re-homing pets and more. And when she’s not doing that, she’s working her day job as a mobile hairdresser. So where on earth does she find the time?

“I often ask myself the same question ….,” she laughs.

A BIG THANK YOU GILL – AND WELL DONE!!

There are no upcoming events at this time.